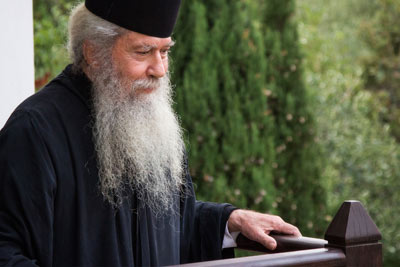 ‘Beauty will save the world’, a phrase by Theodore Dostoevsky, which was a starting point and afterwards a way of life for the elder Gabriel Koviliadis, otherwise known as Philippos Adonis Giannopoulos. In a spirit of philosophy, with love and devotion to his fellow man, Mr. Giannopoulos was a bright star whose light of knowledge worshiped Romiosyni and the richness of the Greek culture, both in the face of Europe and in the rest of the world, always praising the morality of Orthodoxy within its historical timeline.

Born in Kalamata in 1940, and intimated from an inner desire for ministry towards his fellow human beings, and inspired by his aunt and godmather Antigoni Dizis, a brilliant personality of morality and education, Philippos Giannopoulos begins his academic career by studying Medicine at the University of Cologne where he completes the curriculum of this science. Then his attention and interest turned to Byzantine History and Archeology where he completed his cycle of studies with merit, while receiving the highest distinction for his Ph.D. dissertation on Didymoteicho – The History of a Byzantine Fortress. At the same time, he is appointed as assistant of the distinguished Byzantinian historian B. Rubin. In the broad range of his interests, the study of the science of religion next to the French professor Mircea Eliade is added, where his knowledge is enriched over the topic of religions. He then moved to England where he trained his use of the English language and attended specialized courses in History and Archeology.

However, as another Odysseus, the “nostos” for his homeland, Greece, becomes an unbearable burden for the sensitive psychosynthesis of his person and he decides to return to his country at a time of political transition (the period of the Greek Dictatorship). Immediately after his arrival in Greece, Philippos Giannopoulos receives a telegraphic proposal for direct appointment at the Institute of Studies of the Hemisphere of Imos in Thessaloniki. However, he felt that his call was elsewhere, at a meeting of the German-speaking Europeans with Greek culture and Romiosini, through the valuable tours that he offered in the form of initiatory seminars. The result of this particular initiation was the development of a friendly and pro-scholastic climate in European intelligence which contributed not only to knowledge but also to the awareness of the particular value and importance of Hellenism. In short, his work has established him from now on as an informal ambassador of the Greek soul.

Of course, his unselfish intellectual contribution was not limited to European tourists and intellectuals but also to the Greeks where his efforts were equally intense and constructive. Particularly the warm collaboration with the Greek Lyceum of Ellinidon in Kalamata was fruitful and beneficial for the preservation and spread of Greek traditions through his various speeches and guided tours as well as the donation of precious heirlooms of his family, which are currently exhibited at the Greek costume museum of Victoria Karelia at Kalamata. At the same time, Mr. Giannopoulos responded to the call of the French Institute of Kalamata. He also collaborated with the Nafplion Peloponnesian Folklore Foundation, which published his doctoral thesis “Didymoteicho – The History of a Byzantine Fortress” and enriched its collections with even more cultural and folklore exhibits.

Today, however, the person whom Greeks and Europeans once recognized as Philippos Adonis Giannopoulos is none other than the elder Gabriel Koviliatis. It is no wonder that such a sophisticated soul would choose the way of prayer and spirituality that monasticism offers. Elder Gabriel chose a difficult path, which is far from the one that the majority of us could possibly walk. But with God as his guide and his love for the ministry of man as fuel, he overcame every obstacle on the boat of the orthodox church, acting even more zealously for his great vision. A vision that has been realized in recent years with the development of the olive park at the Ieron Kathisma site that he founded in Ano Doli of Western Mani where many olive species from around the world are preserved along with many species of seeds and animals, which are under threat of extinction, such as the Skyrian horse and the Maniatikos donkey. What is important at this point is to point out that he was honored for his contribution to the environment in 2011 with the Ecocity Life Art award and received a letter of praise for his work by the Orthodox Archbishop of Athens and All Greece Hieronymus.

But what really puts on him value in the eyes and soul of every pilgrim, who choose to go to the site of the Ieron Kathisma of the Transfiguration of the Savior in Ano Dolloi, is his unselfish assistance to his fellow man. With a life’s work that has had its roots in the past and especially in his initiatory tours, the elder disclosed the wealth and the truths of orthodoxy, and many people chose to embrace orthodoxy. Thus the elder is no longer only an ambassador of the Greek culture, but also of the Orthodox faith, a contemporary missionary who walks in the footsteps of so many other brilliant personalities present in the historical timeline of the orthodox church. He has also been, metaphorically, a column of support for the afflicted person in many instances, and in particular to parents who suffer from the unbearable loss of their children, recalling that the course of life is difficult and that we should all be courageous and faithful in order to achieve the ultimate purpose of man according to the orthodox church, theosis. In addition, it is also important to mention that he supported and assisted the Gythion nursing home, the Special School of Kalamata and several other social institutions, through his mediation to raise awareness among many believers who can, voluntarily and collectively offer a lot to their fellow human beings who are being tested.

As we go through difficult times, the “Logos” is healing and beneficial to our soul. This preaching of the truth as well as of the revelation of the mystical truths of our faith offered by elder Gabriel has been a manifestation, catechism and illumination for the faithful who participate in his spiritual dialogues. Pleasant and yet beneficial is that the scope of his sermon has now taken on new dimensions, as Elder Gabriel speaks on the Radio of the Piraeus Church in the Radio Paramythia show of Sofia Hatzi, and his today’s speech, genuine and always close to today’s Greek, becomes accessible to people across Greece and beyond.

Nevertheless, a man, no matter how great he is, does not live forever. Eternal is his offer and his work, which is kept alive by his followers. These are none other than his spiritual children and companions, the hieromonk Nektarios, the monk Alexios and the monk Silouanos, to whom he has transposed his vision and who are called in turn to become worthy followers and leaders in the ministry of their fellow men.

So let us all pray for the Fathers of the Ieron Kathisma of the Transfiguration of the Savior of Ano Doloi in Western Mani, as they do for us, so that God will make them worthy and capable of continuing their ministry of their fellow man just as elder Gabriel Koviliadis did, does and will do until the end of his days. Amen.